Reason, says dear Mr. Howells, can save the Negro writer from bitterness. I don’t intend to be bitter – nor do I think I was. If the tea tastes too strong, as they say, it’s only because it has so long been steeped in the boiling injustice of the present condition of the American Negro…. View More 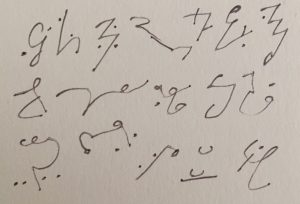 “Students: Every effort has been made to render the present edition of the Dictionary reliable and consistent in regard to pronunciation and the selection of shorthand forms. There will, no doubt, be differences in opinions with regard to the outlines for certain words, since a form which is the most convenient to one writer is… View More

Owning a vineyard has been difficult, and is hard to balance work time and time I spent with my wife. At times I believe that the business has made my wife unhappy. In the early years I didn’t spend much time at home since I been doing many business trips to advertise and sell my… View More

I tend to keep an eye at Uncle Julius from the first day I met him and he advised me not to buy the vineyard because it was goophered. I feel like his motives were to keep us away. I can’t blame him; he was probably living off the vineyard. To his bad luck, I… View More

Hello Chesnutt. This is Annie. I do believe I have an idea to add to your Ideas Journal (yours look good so far just missing a couple things). I would like a box for my rabbit foot. And I would like the kitchen to be done by summertime so I can cook a nice stew… View More

Oh Julius! If this is how you feel then surely you don’t know us as well as you thought. We understand you, don’t we? We listen to your stories, we partake in your magic. And you’ve been around me enough to know there are no flies buzzing around the pocket of my blue dress, where… View More

“John, I wish you would look in my room, and bring me my handkerchief. You will find it in the pocket of my blue dress.” I am in the carriage to go for a drive. I lean back to make myself comfortable and fan myself with my hand. Then I sit straight up and look… View More

I am infatuated by Julius’s stories, always the ones concerning slaves, even though those are the stories he tells. What a terrible business, slavery. John is not as sympathetic as I am. He’s not a believer in magic. Take the story of Becky for instance. Becky was separated from her son, the poor thing. The… View More

Ain’t no two roots the same, an’ ain’t no two conju’ ‘oman the same neither. Jes’ the same as no two trees be growin’ in the same place, us folk an’ our roots an’ our goophers ain’t the same from place ter’ place. Ah’ dun nid ter tell yer wah’ happens when they think we… View More